On Saturday the 18th of October we had a competition against other volunteers from other Organizations. We started at 9:00 o'clock in front of the stadion with two cars. After 30-40 minutes we arrived in Saint George. The organizer of this event was the Turulmadár Youth Office‏ and they had made this event the third time. Photos of the event can be viewed on the association Facebook.

The place where they have made it was the Sportcenter from Vadász Street. At first, all the members of the competition had to register in. There were 6 different teams, one was from the red cross association, ‏the other from the Caritas Association, another one from Mikes Kelemen High School‏, one team was Dávid Ferenc Ifjúsági Egylet and another IKEVár, these five teams were all from Saint George, and at last our team the Green Sun Association from Kézdivásárhely. On the beginning from all different teams one member have to made a little presentation about the Association, for 3 minutes. After that we started with the games, in all games there were allowed always 5 people who can play. The first game was one obstacle course‏ with temple-hopping, carpet slipping until to the white line and with a little ball around the buoys, and run back to the team. The goal was who had made the lowest mistakes and who finished very fast. The next game was cube hunting. There were a lot of cubes and some of them were painted with different colors. The tasks was that one member of the team had to brought the cubes with colors to his own team with closed eyes. There were playing always two teams. The team which had the member with the scarf, was standing in one side and explained where the member could find the cube with the colors. And the other team had to try by loud shouting, to make the member confused. The goal of this game was who have all cubes with the colors, and who was the fastest team. After this game we had a drawing-game. One member of the team had to go out from the hall in another room, and the rest of the team had to paint a football. Yes now you was thinking it's very easy to paint a football but it wasn't easy. Because we had a stick, four strips, a pen and a tape. We had to fixed the pen with a tape on the stick, after that, we have to fixed the stripes on the stick. It was only allowed to hold the stick with the strips, and only on the end of the strips, so it was very hard. Than you had to try with the whole team to paint a football. It is a very good teamwork. When all teams have finished this tasks, the members who had to go out at the beginning, could come back in the hall, and have the chance to choose which painting is the best and which is the worst. But they didn't know which is from there own team. The goal was the painting which was choosed very often as the best. „Volunteer hunting“ was the name of the next Game. There were again always playing two teams in two fields. The teams had to try to shoot up the other team with a ball, and which team has at first nobody in the field, had lost. After this game, we had a break. We get sandwiches and water, from the organizer. After the break we started with the last game: Indoor soccer. Again it was allowed, to have always five members in one team. Every team played against all the other teams. In some teams there was very good football player, so for us it was not easy but we tried our best. At last, there was the presentation ceremony. The first place won the IKEVár association, the second place the Dávid Ferenc Ifjúsági Egylet, and the third place won the GREEN SUN ASSOCIATION „Juhuu“. Our Association got also a cup and a diplom and we were very proud of us. The Event ended at 15:00 o'clock. 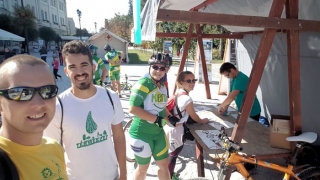 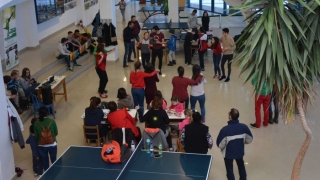