Third commemoration of the Peace Day was held in Kézdivásárhely

More than 120 children, youth and grown-ups participated on september 21th on a happening organised by Green Sun Association, which aim was to stand up against violence. This was the third time the association joined the International Peace Day’s outings. Photos made at the happening can be seen on the Green Sun Associations facebook page!

The traditional happening started with Fejér Ameli Lilla, Green Sun Association volunteer’s song. After that Ráduly Attila-organiser- exposed to the participants the aim of the outing, and the importance of peace. At the happening Tóth Katalin-member of Green Sun Association read Ben Ki Min UN chief-secretary’s message for this day in two lenguages. As a finishing moment Fejér Zsombor activist from Hatolyka made two of his doves fly away. Peace Dove is a symbol against war. Not for his disposure, but for his beauty. The most of the enquirers were from the schools Turóczi Mózes – Kézdivásárhely, Bartha Károly from Nagyborosnyó and Petőfi Sándor from Kézdivásárhely. The organisators thank for all of them. 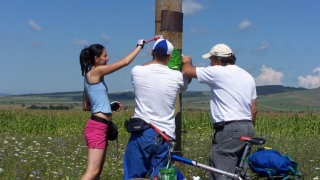