Renaissance mysteries in the pensioners' club 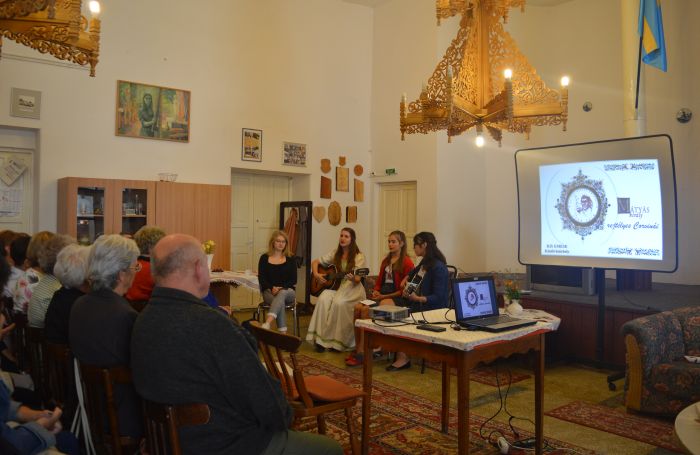 On the 18th of September, 2019 the active volunteer of the Green Sun Association and secretary of Bod Péter High School, Emese Kis held a presentation about the "Secrets and mysteries of Matthias Corvinus' codexes", in the premise of the Maaslius Pensioners' Club. The event was organized by the hosting organization and the Rák Ellen a Jövőért Association from Kézdivásárhely, and was part of the Matthias Corvinus memorial year festivity series, which is slowly coming to the end as it was announced by the Hungarian State Secretariat for National Politics in 2018. Photos taken on the event can be seen on the Facebook page of the Green Sun Association.

In the last months, Emese got invited to many surrounding towns in Covasna county and further with this lecture, and to make her presentation more colorful, as well as to provide the opportunity to her students and fellow association members to show their talents, she invited a group of girls with her to perform before her presentation, who were the following: Kincső-Kriszta Kicsi, Anita-Mária Imre , Beáta Kerekes , Erika Béres and Nikolett Kovács from the Bod Péter School, Ágota Bagyinka and Mariam Sargsyan from the Green Sun Association.

To celebrate the 575th year of the king's birth, local communities and students from the Bod Péter School recalled the atmoshpere of the king's court with a renaissance dance flashmob, partnering with the Women's Association, Haszmann Pál Museum, and Tegyünk Kézdiszékért Organization. First, the group performed the dance in the Burrogtató in Csernáton, 2018, then in Kézdivásárhely on the International Peace Day.

We would like to thank everyone who attended the event as a contributor, partner or sponsor.