Year by year 21th September had become an important day all over the world as a "World Peace Day"! Also this year event made by Green Sun Association had become part of it bringing people awareness about violence and deeper tolerance all around us. Photos taken at this event can be viewed on the Facebook page of the association.

For the fourth time Green Sun Association gathered together more than 50 people to make the sign of peace. A bit ruined by rain this year event was held indoors at Kézdivásárhely (Târgu Secuiesc) Sport Hall. After short opening by Association president Ráduly Attila followed the reading of the letter from United Nations (UN) Secretary-General Ban Ki-moon written in Hungarian and Romanian by member György Andrea. At the end of the happening Kovács Timea, a volunteer at the association read a poem. Afterwards followed at Sport Hotel a presentation by Reformat priest Raff Róbert about War and weapons. This event was an improvement if we want to do big things we need to start with small ones. As a lot of participants were children we hope they listen carefully and in the future will become members of a loving and carefull nation! 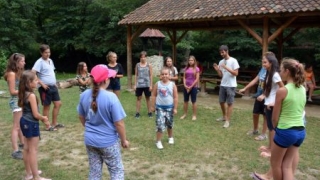