How I met Green Sun…

The first time I saw Him was at a tree-planting event. He was sympathetic and made me curious. I was surprised by his lively enthusiasm to act, his decisive behavior, and the selfless love glittering in his eyes, that I saw glowing then and ever since. And I fell in love with him… Of course, I approached him with the carefulness that characterizes me. At first, I held out my hand as for introduction, but to my surprise I got a warm and friendly handshake. I was pleasantly surprised. I can still remember the lively gleaming in his eyes, when he glanced at me. It was not his hand, but this glance that impressed me and truly and lastingly captivated me. Then our first planned meeting came along. I was anxious and shy when I entered the lounge. I watched his glance, his movements, and reactions with curiosity and suspicion but I was reassured to find that same friendly kindness that I had experienced before. This encounter was one step towards him. And I continued approaching him step by step. The feeling was mutual. Thus we set off on a road together, walking both ahead and towards each other. A beautiful and hopefully a long way lies ahead us, which sometimes is bumpy and sometimes straight, at times adventurous and at times less exciting, every so often dull – but mostly joyous and colorful. It’s a road on which I gradually I gave Him not just my hand but my knowledge and my heart as well. A road on which I haven’t traveled before and which I’m glad I have found. And I’m also happy that on my way I have met such a nice Companion. Author: Györgyjakab Boróka Translated by György Andrea 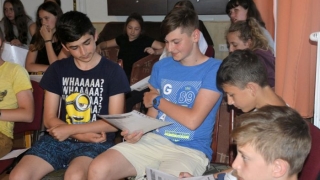